Skip to Content
Home Blog Creative How To + Inspiration Interview with Ann Mauren, Author of Mayne Attraction: In the Spotlight

Today, I have the pleasure of speaking with Ann about her romantic suspense novel, In The Spotlight, the first installment of the Mayne Attraction series.  I met Ann on Twitter when she replied to one of my tweets, and over the months I have come to know the powerhouse behind the clever prose.  What first struck me about Ann was her ability to spin even the most mundane email into a witty, worthwhile escapade of quips and repartee.  Whenever her name popped up in my email, I happily clicked to see what unusual take on a situation would whirl me into a mid-day entertainment feast. As I continued to learn about Ann, I also realized she has some phenomenal statistics that support what a great writer she is.  Namely, 88,000+ downloads, and reaching the number one spot on Amazon Kindle’s Free Romantic Suspense category.  As we speak, In the Spotlight still sits in the top 20 on the list.

Of course I’ve read In the Spotlight and am happy to report Ann’s writing is refreshingly innocent and unusual at the same time.  Her talent revolves around creating original, endearing characters in such detail that you could swear they were real, breathing, admiringly quirky, flesh and blood beings.   Her back story and setting details are impeccably drawn, while her plot is both heart-a-flutter romantic and laugh out loud funny.

So without further ado, here’s Ann:

Hi Ann!  Thanks for stopping by my blog.  First off, can you tell us a little about yourself?

Greetings, Mande! First just let me say what a thrill it is to be visiting you on your blog!  This has got to be one of the most beautiful and mystique-filled digital realms I’ve ever seen!

A little about me? Well, I’ve spent almost my entire professional life working in the foodservice marketing and distribution business, so I tend to think of things in food-related terms.  That being the case I would say that I spin career and motherhood plates by day and a romance writer dessert dish by night.  I wrote my first novel with a baby in my arms while sitting in a glider in front of a laptop on a TV tray.  As a result my back—and my sleeping pattern—may never be right again!   I am mommy to two young boys which means that I know far more about things like Nintendo DS, SpongeBob and Legos than any normal female should.  In my day job as a Marketing Coordinator for a national foodservice company I enjoy the challenge of writing pitches for sometimes pitch-resistant items like caffeine free no sugar added sweet tea.  (No, I’m not joking—we really do sell that!)  I love to laugh, but nothing pleases me more entertainment-wise than a sigh inducing happy ending.

Ann, I was struck by the amount of richly drawn detail in both your characters and setting.  Is anything in your book based on real life experiences or is it purely imagination?

Part of the fun of writing In The Spotlight was placing all of the scenes in real locations that I grew up around: my old high school, our hometown grocery store, movie theater and restaurants among others. Picturing my characters in those familiar places meant I could spend more time imagining the story since the settings only required descriptions and not a “built from scratch out of my imagination” effort to construct.  The idea of a secret security detail and how I would handle the situation if they were looking after me was just a crazy notion that popped into my mother of a newborn sleep deprived brain.

I can name a handful of my favorite times with Ellery—but one of the most memorable moments for me was her makeover as a Goth chic.  What was your favorite chapter (or part) to write and why?

Though she nearly dies, I particularly enjoyed writing the scene where the heroine, Ellery Mayne, takes a clandestine overnight trip out of town with her two Goth friends to visit an amusement park.  It was fun to detail Ellery’s obsessive compulsive behaviors, insecurities related to her body image, and her candid reaction to a near death experience at the hands of her best friends.  These events are also addressed in the upcoming book In The Shadow (book three of the series) as told from the viewpoint of Ash Ryan, a member of Ellery’s security team who is completely besotted by the quirky yet lovable object of his employment.  Writing Ash’s perspective as he observes the situation unfolding into a disaster was one of the highlights of my experience as an author.  If writing could be that fun all the time, I might only stop to get coffee!  If you are curious, you can check out both passages on the Mayne Attraction website. Ellery’s narration is here and Ash’s can be read here.

While you’re here, what would you like your readers to know about your book?

I think it’s helpful to understand from the outset that you will get the complete picture of the Mayne Attraction story through the individual narrations of the series’ three main characters: Ellery, Gray and Ash.  The two follow-up installments consider some of the same events as book one but they also provide back story and dialogue from the past and events that move the story forward.  If you are detail oriented you may enjoy Ellery’s perspective a little more after you’ve read Gray and Ash giving their versions of events.

You know I’m dying to read Smoke and Shadow.  Your ability to spin a tale from different perspectives is truly phenomenal.  I recently got a sneak peak at a Mayne Attraction short that’s soon to be released and I was floored at your ability to retell the same events and dialogue from an entirely new perspective while weaving a brand new and exciting story at the same time.  When can we expect your next release?

As you mentioned, I have a short story called Barefoot Heroine—which is told from the character Ash’s point of view—that I am hoping to release before the holidays.  I am also working on the conclusions of both In The Smoke and In The Shadow right now.  I hope to release them simultaneously in the early part of 2012.  If anyone wants to complain about the timing I will be happy to accept offers of babysitting in order to speed things along!   Uh, seriously.  No takers? Okay, well if you’d like to say hi, ask a question or tell me something classified you can tweet me at @AnnMauren, check in at my Facebook author page, or drop me a line at AnnMauren@hotmail.com.

Thanks so much Mande for having me over!  This blog is the sparkliest one I’ve ever seen!

Thank you Ann!  I really encourage anyone with a soft spot for sigh-inducing romance to check out Ann’s novel,In the Spotlight.

Oh, and one last, and very exciting development—for the holiday, Ann is releasing brand new cover art.  And we’re unveiling her design right here and now.  Be sure and check out her links and new artwork below. Here’s more about In the Spotlight!

After a foiled abduction attempt, Ellery Mayne realizes that an entire security detail has been shadowing her every move, protecting her from danger she didn’t know she was in. Working to uncover the secrets behind her elusive watchers, she carefully conducts her own surveillance, testing the limits of professionals who think she is clueless about them. Though they are hard to spot, their loyalty and care for her is not. When she finds a way to declare her feelings for one of her guards, he is blindsided with joy but fearful that his team will lose its lucrative security contract because of his relationship with the mark they’ve all come to love. 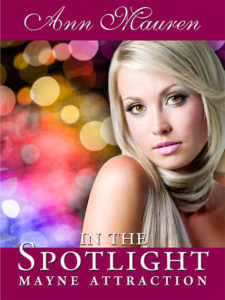 As secrets to the identity and intentions of the team’s mysterious employer begin to unravel, Ellery’s deeply buried affections resurface and battle with the love and loyalty she feels for her security team and her new love. Searching for answers and conscious that her choices will impact loved ones and guardian angels alike, Ellery finds that her life is ‘In The Spotlight’ and she is the ‘Mayne Attraction.’

Set in my home town of Louisville, Kentucky, USA, this story is a young adult romance about a shy loner who finds herself ‘In The Spotlight.’    The series contains three installments:  In The Spotlight, In The Smoke, and In The Shadow, each told from a different character’s viewpoint.  For a limited time you can get a free download of In The Spotlight for your Kindle, Nook, iPad or other e-reading device.