Skip to Content
Home Blog Creative How To + Inspiration Interview with Matt Posner, Author of School of the Ages Series 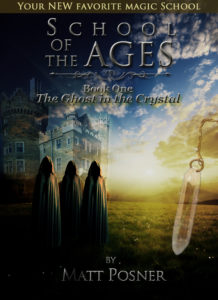 Today I have the privilege of interviewing Matt Posner, author of School of the Ages series, a five-star rated young adult fantasy.  Not only is Matt an extraordinary story-teller, but a poet, a musician, a teacher, and an outspoken advocate for indie authors.

Welcome Matt!  Glad to have you at my blog. Can you tell us a little about yourself?
I’m a teacher and a writer. I live in Queens, NY and I teach special education English, SAT prep, and some college.  I’ve been married to Julie since 1999. I’m a voracious reader and I’m very aggressive about building the community of indie writers, meeting people and introducing them to each other and supporting them with my own interview series, to which you have agreed to contribute as part of your release of Bonded next year.

Yes, I’ve agreed (no, begged) to be a guest on your blog.  My promo efforts are in their infancy, and I am already exhausted.  I appreciate your offer to promote my work!

These books do take forever to bring out, don’t they? It’s almost as if we indies are just as much perfectionists as those writers who work for legacy publishers, and just as talented without being anointed by the BIG SIX. Harrumph, cough cough, sorry. That wasn’t what you asked me.

But you’re right.  The amount of work that goes into producing, distributing, and marketing indie books requires talent, endless hours, and determination across many disciplines—rivaling that of any traditionally published author. Your generosity and support of the indie path is nothing less than heroic.  For an indie book to rise up the sales ranks, it needs to stand apart from the crowd. Tell us why your book stands out in your genre—what makes it special from the rest?
My School of the Ages series is about magic in the world we know, with real places, real events, and two elements that above all else you won’t find in other such books. One, which I strive for aggressively, is multiculturalism. Everyone in the book doesn’t belong to one culture or race, but to many, and they have to and do learn to get along. Similarly, the magic isn’t exclusively from one culture. In the first two books you’ll find a system that’s partly European Hermeticism, partly Jewish Cabalism, and partly the yogic arts, and that expands into more traditions and more detail as the series continues. If you start researching the things I’ve written, you will find that I have blended my inventions with real history and tradition so thoroughly that you will think a lot of things I made up are really out there to be researched.

The other component I use that other books don’t is that I mention God. In researching those who have been involved with magic and the paranormal throughout history, I didn’t find any atheists. All magicians believe in God, even Satanists, who are idiots. Instead of pretending there is no God while writing in a disguised way about Christian themes, like J.K. Rowling, I decided to tackle the topic head-on and try to build a representation of God that draws upon many traditions.

All right.  You’ve hooked me.  I am dying to read School of the Ages and delve into your cultural, religious, magical mash-up. I find it very appealing that you’re tackling the same subject society faces with on-going globalization.  Since you’ve done your research and based your concepts on history, can I assume you’ve included real life experiences?  Or is all purely imagination?
Yes, there is a lot based on real life experiences. I use places that I know personally as settings, and The Ghost in the Crystal ends with a dramatic scene from recent history. I don’t want to say what it is because of the surprise value, but if you want, Mande, I’ll tell you privately.

Ha!  I don’t think you’ll have to, because as soon as I’m done with this interview I am heading on over to Amazon to buy your book.   Tell me, Matt, why did you choose to write this particular story?
I’ve been writing about magic and magicians in one way or another since I was sixteen, including unpublished novels about them. The Necromancer’s Tale was a book I was marketing in 1992-1993 which was a sharply literary epic fantasy adventure whose protagonist was a morbid and wicked old mage accompanied by a sweet young girl he loves as a daughter and is training in his macabre arts. I set this type of genre writing aside for a few years, but then in early 2002 I was working in a yeshiva high school and I got what I thought was a radical idea. I decided to combine the fascinating subculture of Jewish orthodoxy with others that I knew — Hermeticism and Eastern traditions — and see what I could get out of that juxtaposition by putting them all in the same school.

I cannot wait to see how you handle the clash of subculture via story.  What character speaks the loudest to you?
Well, I certainly enjoy my supporting character/heroine, Goldberry Tinker, a tart and slightly snotty British girl with a good heart, who provides the common sense in the first two books, and perhaps a few histrionics in the two that follow, who… Uh, excuse me, I… Oh, hi, Goldberry.

Goldberry> If you wouldn’t mind not talking about me behind my back. Now what is it this lady wishes to know, exactly? My place of birth? My mystical powers? My favorite perfume? Any other ways you would like to violate my privacy by posting details about me on the Internet? He does think he’s clever, this
one. Don’t you, Mr. Author?

Matt> No, I didn’t mean that. It’s only that I want people to be interested in reading about you.

Goldberry> If that’s what you want  you don’t need to tell them I’m snotty, do you? Is that opinion really of so terribly much value that it has to be in someone’s blog? You know, ma’am, he really is a bit of a git, this author of mine. At any rate, besides the School of the Ages novels, I’m also in a short story book coming out this December, called Tales of Christmas Magic. I have a solo adventure in that slim volume. I don’t exactly get to bring on any holiday cheer, but that’s not my fault.

Goldberry, first off, you sound utterly charming; I can’t wait to officially meet you.  Secondly, Matt–can’t you keep your characters under control?  I’m in a hurry to get over to Amazon–I have an intriguing book to buy, you know.

Now back to business. What would you like your readers to know about your book?
It is NOT a Harry Potter rip-off.

I don’t think you have to worry; there is no mistaking School of the Ages for Harry Potter after this interview. 😉 Is there a specific message in your book that you want your readers to understand?
Being smart and bold leads to solving problems. You don’t have to have magical powers like the kids in the story — being determined and thoughtful is more important.

Oh, so true, Matt.  Who or what were your influences for this particular book?
For The Ghost in the Crystal, I think the biggest influences were Chaim Potok’s The Chosen and the collected occult-themed non-fiction works of Colin Wilson. Alice in Wonderland shows up in a big way in Level Three’s Dream, although a lot of the humor there is really Monty Python style humor. Overall, as an urban fantasist, I think my inspirations have been Wilson, Tolkien, Jane Austen, and Neil Gaiman.

Much like your cultural melting pot, that’s an eclectic mix! What has been your biggest obstacle in becoming a published author?
Literary agents.

*peeling big smile off face* What project are you working on now? Will you have a new book coming out soon?
The third School of the Ages novel, The War Against Love, should come out by next summer; it’s fully drafted and mainly needs revision. I’ve done a chunk of the fourth book, too. Meanwhile, by second week of December you should be able to get a short story book, Tales of Christmas Magic. I honestly could write a huge amount of stuff if I had time, but unfortunately, I have to work for a living.

My magical power of precognition (or logical thinking) foresees you making a living as an author soon. What has been the toughest criticism given to you as an author? What has been the best compliment?
Best compliments on The Ghost in the Crystal:  an Amazon reviewer said the book would make a good movie; and a reviewer told me privately the book made her cry. Toughest criticism:  Being accused of mirroring Harry Potter.

Do you have any advice to give to aspiring writers?
Get a degree in marketing.

*bursting into wild bouts of laughter* So true.

What would your main character think about you as a person?
<Goldberry:> Simon is actually the main character, not me, but as I said, I think the author’s a bit of a git.

Thanks, Mande. It was fun to write this interview, so I ran a bit long.

I enjoyed having you here and making me laugh.  If you’re interview is any indication of your writing ability, I will be enthralled with your story. Thanks for sharing your insights about School of the Ages.  I’ll see you over at your blog in the near future.  Right now, I am on my way over to Amazon.com.

More on the School of Ages

The School of the Ages series, set to be five books in length, tells the tale of the young magician Leicester Moore, who calls himself Simon Magus, as he develops his magical power at America’s Greatest Magic School — School of the Ages. Simon is accompanied in his painful growth by an exciting cast of allies and enemies, including his best friend, Goldberry, a tart-tongued and beautiful English girl; Robbie Ravitz, his roommate who likes to summon elementals; Yakov Mermelstein, a big and volatile Chasidic cabalist; his stern teacher Dr. Solomon Archer; and many many more. It’s NOT Harry Potter — it’s real magic in the world we know — it’s School of the Ages. Volume One is The Ghost in the Crystal; Volume Two is Level Three’s Dream. Coming in 2012: Volume Three, The War Against Love.

Matt Reads From The Ghost in the Crystal

Buy The Ghost in the Crystal

Amazon UK (I love my UK readers too!)

Other Books by Matt Posner

With Love anthology for Japan at Amazon: http://tinyurl.com/3udh5kf featuring a
supernatural story by me. Also in paperback and also sold at Smashwords.

Coming soon: I will be in Kindle All-Stars Resistance Front.