The ShadowLight Saga takes you to a time and place both magical and familiar, where nothing is quite as the characters expect them to be–a place of myth, magic, warriors, and heroes discovering their powers. 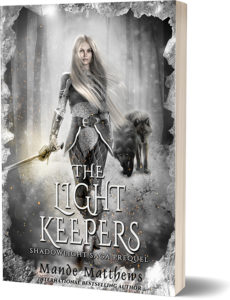 The ShadowLight Saga begins with A Free Prequel: The Light Keepers

“It’s sexy, magical, intriguing and fast-paced…The Light Keepers hurls you right into the action…leaving you begging for more…”

Isolated because of the power she holds inside, Astrid longs for contact with another human being. But the resulting loneliness drives Astrid deeper into the shadowwalk—a power she is forbidden to use, a magic that lands her directly into the arms of the Shadow.

This short prequel to the ShadowLight Saga offers a revealing glimpse into the history of the beautiful and mysterious warrior maiden known as Swan, called Astrid in this prequel. It takes place a few moons before Bonded begins and is a self-contained novelette of approximately 10,000 words. 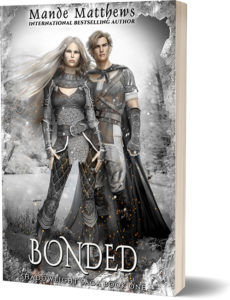 Bonded, Book 1 of the ShadowLight Saga

“Fantasy writing at its best…This book has it all: magic, romance, humor, suspense, and a pace that keeps you reading all night long!”

Hallad Avarson’s vow to protect a mysterious warrior maiden pits his best friend against him, endangers the life of his little sister, and leads him into a treacherous realm of magic and intrigue.

This richly imagined epic fantasy transports readers into a tale of seductive power, heart-wrenching love, and edge-of-your-seat thrills while following inspiring young heroes and heroines as they discover their abilities and destinies interweave with the fate of a captivatingly original world.

Get the book:
Amazon | Other Retailers
Also available on Google Play internationally 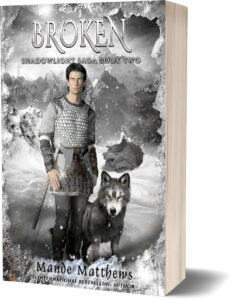 Broken, Book 2 of the ShadowLight Saga

“Except for its length, the first two books remind me of Jordan’s huge collection. Many complex well-developed characters and plots within plots. Never a dull moment.”

It is the dawn of the Age of Silence–the age yet to come, the age that is feared, the age when silence pervades the lands.

Though heroes have bonded, relationships were forged and prophecies have dawned, all could be broken as the Shadow maneuvers into position for the battle to possess Astrid.

Get the book:
Amazon | Other Retailers
Also available on Google Play and internationally 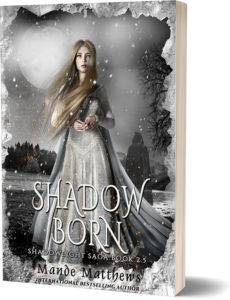 The adventure of Ginna Hummeldottir takes place a couple of weeks after Erik and Rolf leave Hummel’s farm in Bonded, book one.

When the 9th daughter of a humble farmer is given an unthinkable task, she ventures into the night, where the Shadow’s breath rolls over the ground, seeking, searching for its prey. Little does Ginna know, the Shadow is hunting her.

But Wait? Will there be a book three?
Absolutely! Stay tuned or sign up for to be notified of Book 3’s release.

Caught between her duty and her heart, Queen’s Honor is a retelling of the Arthurian legends from the perspective of a young Guinevere.

“If you love tales of Lady Guinevere and her beloved knight as I do, please read this and savor. The story is written from the heart as if Mande herself is the mystical Guin. I loved this book and highly recommend it.”

Seventeen-year-old Guinevere holds the crown to an ancient kingdom. Without brothers to ascend the throne, marriage to her will assure any man the right to rule. Arthur Pendragon has won his power through battle. His legions have elected him their king and protector but he seeks to legitimize his claim to High King through marrying Guinevere. But Lancelot, a valiant knight with a broken past, possesses something that Arthur can never win…Guinevere’s heart.

Download and Read for FREE:
Amazon | Other Retailers
Also available on Google Play and internationally

“Short but its beautifully written & better than books 3x’s its size! Loved it!”

After agreeing to marry Arthur, Guinevere thinks she’s solved all her problems—the protection of Camelaird, the freedom of her cousin, and the power to make a difference. But when she finds herself unable to control her attraction to Lancelot, a chance encounter with the knight threatens to ruin everything she’s strived to achieve.

Get the book:
Amazon | Other Retailers
Also available on Google Play and internationally

“A magical, exciting build-up to a tenderly written sex scene…I loved seeing from the viewpoint of Elibel. I have so much compassion for both her and Arthur now!”

Wondering what happened that night with Elibel and Arthur? This short story reveals the events of that fateful rendezvous.

Get the book:
Amazon |  Other Retailers
Also available on Google Play and internationally

But Wait? Will there be more Queen’s Honor?
After considering reader requests, the answer is YES! The entire series has been outlined and two books are underway. Watch for release dates or signup to be notified for possible review copies or discounted book launches. 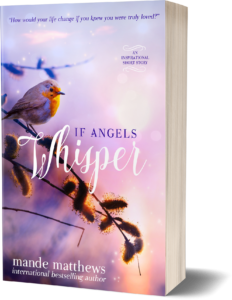 “Warmhearted, motivational, inspirational. This ethereal story will give your heart wings.”

There’s always been something wrong with me but I’m not sure what. I’ve had daydreams of angels since I was a child, specifically a guardian angel to rescue me from my addicted mom, non-existent father, and friendless existence. But now odd events are happening. Like visitations from a robin, visions I can’t explain, and an out-of-body experience—if that’s what it really was. I’m starting to question everything. What secrets have my parents been keeping? Who am I, really? And could I be worthy of love in more ways than I ever imagined?

Download and Read for FREE:
Amazon | Other Retailers
Also available on Google Play and internationally 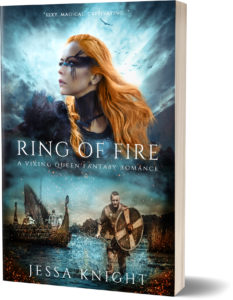 Sigrun Fairhair, Queen of the Island of Taryn, battles to secure her borders and protect her people from constant invasions. Up North, men just don’t believe a woman should be Chieftain. Brand Torsson, famed Commander of the Sea Eagle, risks life and limb to sail to Taryn and secure an alliance by marrying Sigrun, bringing safety to her people and riches to his. But Sigrun invokes the magical Ring of Fire. She has other ideas about how to use Brand, none of which involve marriage. 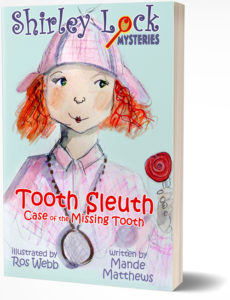 “Laugh out loud funny! Shirley is a hoot! She’ll steal your heart AND your funny bone!… Entertaining children’s detective and mystery book for kids from beginning to end!”

Move over, Nancy Drew! There’s a new detective in town!

Join Shirley and her little brother, Ellery, in her first case. When Ellery’s front tooth turns up missing, Shirley Lock is on the case. But will the detective duo be able to find the missing tooth? Or will they find a scary thief, a hairy suspect, and a doggone dead end instead?