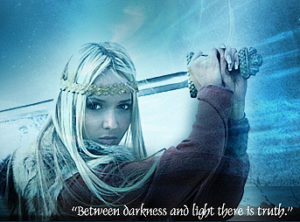 The world of ShadowLight originally sprang from a combination of my research into Norse mythology and a random thought.  The phrase, “between darkness and light there is truth,” formed one day and I doodled the saying on a piece of paper.  The two concepts mingled, and the world took root.

Fascinated with the idea of worlds existing on separate planes from one another (from Norse cosmology), I began noodling the concept of two worlds co-existing together in separate planes with the ability to walk between worlds.  A Shadow Walker (one possessing Shadow magic) could view into the other realm through dreams, touch the other realm through an astral-type projection, or physically cross into the world depending upon their ability in the magic.

With that idea solidly in place, I based my Scandian world loosely on Sweden, before Christianity spread the beliefs of Christendom and Norse mythology reigned as the prime belief system.  Please note I said “loosely” as I have taken many liberties to adjust Norse mythology to my own imagination!  My secondary world bloomed from the land of Gods, known as Asgard in Norse mythology, and called Alvenheim (elf home) in ShadowLight.

From there, I wrote a creation story, explaining how the two worlds were formed from Mother Earth (referred to as Mother Nerthus) and her Guardian Tree (which coincides with the Yggdrasil Tree in Norse mythology – the tree that connected all four worlds in Norse belief.)

The land, the magic, the heroes all exist in twos.  Two worlds, two magics, two heroes – as an ongoing exploration of duality, attempting to show that right and wrong, good and bad, the concept of opposites only exist from a single point of human perception.

I am a notorious doodler – notorious because my artistic skill lacks from no desire to actually learn how to draw.  From childhood I would illustrate my own stories, and somehow that managed to translate into a career as a designer.  However, I still stink at drawing!  Then along came Photoshop and I couldn’t help myself.  The above photo is a Photoshop doodle (meaning a bunch of pictures cut and pasted together) of how I think Swan would look – long ice-white hair, eyes so dark blue they appear black, and a battle sword gripped and at the ready.